Adebayo Faleti, Africa’s first newscaster, Africa’s first stage play Director and Africa’s first film editor, who died on July 23rd 2017 at the old age of 95, has been laid to rest. He was buried in his Agboye Village, Oyo State, on Friday September 8th.

His funeral was attended by many dignitaries including Governor of Oyo state Ajimobi, traditional leaders, and practitioners in the movie industry.

See photos from his funeral below and for those who don’t know who this man was, please educate yourself below… 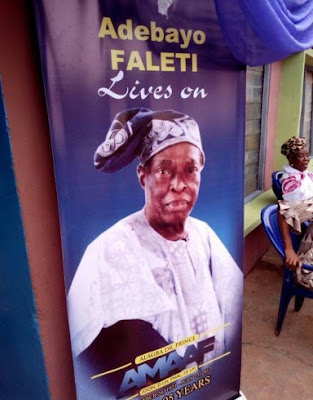 He was responsible for translating Nigeria’s National Anthem from English to Yoruba. He also translated speeches being made by Nigeria’s former Attorney-General of the federation Chief Bola Ige, military president of Nigeria General Ibrahim Babangida, former premier of the Western region of Nigeria, Chief Obafemi Awolowo and Chief Ernest Shonekan – Head of National Interim Government of Nigeria, from English to Yoruba. Faleti has published a dictionary containing the formal or official use of Yoruba names.

He received many awards, both locally and internationally, including the national honour of Officer of the Order of the Niger (OON), Doctor of Letters (D.Litt), Justice of Peace (JP), Jerusalem Pilgrim (JP). [2] Adebayo Faleti had received the Festival of Arts award with “Eda Ko L’aropin” in 1995 and the Afro-Hollywood Award for Outstanding Performance in Arts in the United States (2002). His movie – “Basorun Gaa” also received Breeze Award in London as the best epic movie of the year in 2004. The first ever magazine He wrote for was called Triumph when He was at the University of Ibadan as an undergraduate. He was also a columnist with the Nigerian Tribune (One of the longest-serving newspapers in Nigeria)

Faleti was born in Agbo-Oye, Oyo State, though lived in Obananko, Kuranga, near Oyo State. He is the first son of his father, Joseph Akanbi Faleti and the only child of his mother, Durowade Ayinke Faleti. From an early age Alagba Faleti always had passion for drama. Unfortunately, his parents could not fund his education to pursue his dreams due to lack of income, so he decided to put his primary education on hold. He then gathered a couple of interested colleagues and started his own successful theatre group, named Oyo Youth Operatic Society (founded in 1949).

Faleti later found his way back to school by getting a job in a primary school, in which he worked for six years to raise enough funds for his secondary schooling with the financial support of his father.[4] In 1966, he attended the University of Dakar in Senegal and obtained a Certificate of proficiency in French Language and Civilization. Two years later, he graduated from the University of Ibadan, Nigeria, with an honours degree in Lit-in-English. In 1971, he attended the Radio Netherlands Training Center in Hilversum, the Netherlands, and received a certificate in Television Production

Spyreporters.com is an outstanding, groundbreaking news website that brings journalism to citizens at their convenience to report ongoing news, information, technology, corruption and government malfeasance in Africa. Using photos, text, and video dynamically, the site enlightens and prompts concerned African citizens and activists globally to act, denouncing officially-sanctioned corruption, the material impoverishment of its citizenry, defilement of the environment, and the callous disregard of the democratic principles enshrined in the constitution.
Contact us: [email protected]
© 2015 - 2017 SpyReporters Inc.