Egypt says archaeologists have found a Pharaonic tomb in Luxor housing the remains of a priest who oversaw the mummification process and his wife, dating from the 13th century B.C.

The tomb, that is on the West Bank of the Nile River near the valley of the Kings, is that of Thaw-Rakht-If – the overseer of the mummification shrine at mut temple. 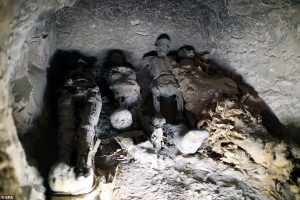 Incredible photographs show a view inside the recently discovered tomb at al-Assassif cemetery, that is 435 miles (700km) south of Cairo, Egypt’s capital.

El-Enany represented the recently discovered intact casket within the topographic point as glorious. it’s engraved in wood with eyes decorated with golden sheets.

Mostafa Waziri, Secretary General of the Supreme Council of Antiquities explained that after removing 300 meters of debris the mission uncovered the tomb, the wall of which is decorated with scenes depicting the deceased’s family, including his wife Kharousekhmet-Nefret.

Inside the tomb two huge wooden anthropoid sarcophagi were found but studies revealed that they do not belong to the owner of the tombs but to two different people from a later period named Padiset and his daughter Nesmutamu, both are in a good condition.